Romeo left Scandal viewers with tears in their eyes. Scandal viewers all got into their emotions on Wednesday nights episode. For a moment l think everyone forget that it’s all just an act as Romeo did everything he could to stop his mother from digging her own grave.

It is not a secret that from day 1 Romeo never liked Simo and things just got worse when he fell in love with Romeo’s mother. Even though Simo is Romeo’s half brother Grace didn’t care less as she is head over heels in love with Simo.

Romeo knows that Simo is up to no good and he tried his best to expose him before his mother but the love stricken Grace didn’t believe anything Romeo had to say. Due to her foolishness her hotel is now at stake and she is in the dark about as Simo has pledged the hotel to his boss Mamba.

Romeo even tried the last attempt to safe his mother at the wedding venue, as he pleaded with some guest to help him expose Simo. However non of them wanted to get involved. In this scene Hungani proved what a talented actor he is , he showed us that he was both emotionally and physically drained as all his efforts were to no avail.

Romeo’s mother and Simo tied the knot and fans were crying with Romeo and some can’t wait for Grace to realise her mistake the moment Simo takes everything away from her. 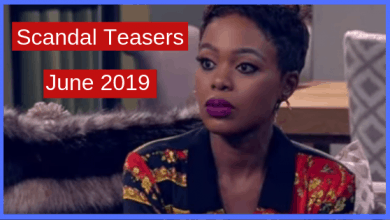 Scandal Teasers June 2019 [Next on Scandal]