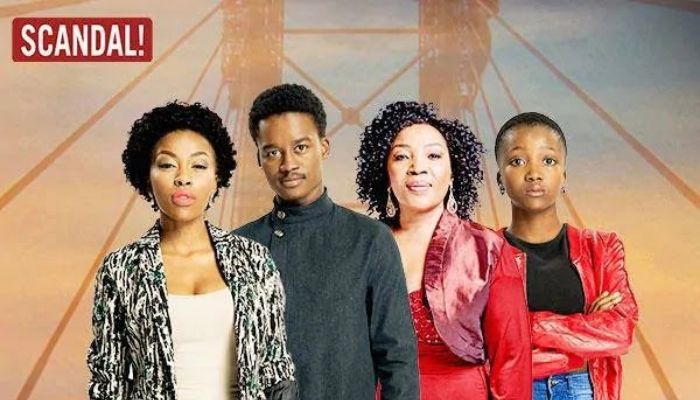 We bring you Scandal Teasers September 2021 for your viewing pleasure. Anytime you want some catch-up on your favorite South African Drama TV Shows Today SA Tv. Presenting you with what’s coming up on Scandal and Tv episodes free online streaming is what we do.

You may also Like: Fanie’s Death Shatters Skeem Saam Fans,Is He Dead or Alive?,Find out Here

I mean, how do you generally end a hectic day? Are you one of the people who enjoy watching South Africa Tv shows?. If you’re of them, Mzansi Magic has some of the most awesome TV shows you can enjoy.

The Soapie Teasers were initially provided by TVSA. This article was first published by them. This is what will be happening or What’s coming up on Scandal teasers September 2021:

Scandal is set at the fictional media company Nyathi Family Holdings (NFH) based in Newtown, Johannesburg, which produces the newspaper The Voice and the gossip magazine, Scandal. It follows the lives of the people and families working at NFH magazine as well as other characters in the show. It also tells the story of socioeconomic divides set in a local township of Soweto and the Johannesburg suburb Newtown, where NFH is based while looking at the private desires of the high-classes and making ends meet of the lower-class.

We have the latest ETV’s Scandal teasers for the Month of September 2021.

Coming up on Scandal! this September 2021:

Boniswa’s running out of options and all her past misdeeds are ganging up on her. Dintle confides in a friend about the best moment in her life.

A brother and sister join together to put their past behind them. A man buys a ring and prepares to ask the big question.

Dintle’s big night gets off to a good start and ends with a huge bang. Neo says no to something crucial and Lerumo says yes to a life changing gift. Actions of a selfish young man put lives in jeopardy and drags his family members into his huge mess.

One life is saved but another is lost. Neo’s chickens come home to roost.

After reckless behaviour by their son, a family try to do some damage control. The walls are closing in on Neo and anyone around him.

Dintle manages to hide the truth but she won’t be able to keep it bottled up forever. One brother upholds the law while his family prepares to further deceive it. A family finds themselves in desperate need of a place to sleep.

Lerumo’s hunt for a killer on wheels leads to an unexpected discovery. Dintle’s world starts coming apart when she learns of Q’s intentions. Lerumo finds himself in hospital and faces a dire diagnosis.

A family is split as it scrambles to hide things from one of its own, as well as the police. A bereaved woman is determined to find justice. A son tries to convince his father that life is worth living.

Caiphus and Gloria receive an offer that could change their lives forever. Lerumo is caught between a rock and a hard place by a decision his father makes.

Caiphus starts to question whether or not he’s the right man for the job. Neo is steadfast that there are some things a man should never to do, leaving Lerumo desperate.

The crisp smell of a bank-rolled future nudges a man across the line. Lerumo finds himself at a moral crossroads and Seipati fears for their future.

Caiphus searches for answers while a patriarch risks all with a radical lie. Javas catches a friend in a compromising position.

A young brother finds he’s not too old to be scolded while the eldest can’t seem to make amends. Tebello learns that no good deed goes unpunished.

Ndumiso confronts Caiphus. Will Caiphus spill the beans? Tebello comes up with a plan to help Neo but will it succeed?

Ndumiso makes a startling revelation which prompts Dintle to follow up and take action. In trying to help save his grandfather’s life, Tebello makes a grave mistake.

Dintle starts to dig and her course is set when Caiphus sings a false note.  A man’s desperate attempt to hold onto his manhood leaves him more panicked than before.

Tensions rise among the Kubekas who don’t realise they are about to step into a trap. Omphile gets a surprising call but worries about what, or rather who her sister might discover.

Dintle’s questions begin to show cracks in the Kubeka family bond. Lindiwe returns from their honeymoon only to find demons waiting for her.

Vukile is forced to leap into action when a family member allows himself to be pulled by the nose. Omphile is surprised when she hears where Lindi is planning to stay.

A family member succumbs and offers to tell a suspicious Jojo the truth. Lindi wakes with a new mission to solve a past problem.

The day of judgment has arrived for Caiphus, but how hard will the hammer fall?  Lindiwe is swimming in muddy waters and thinks the ancestors will save her from drowning.

Alcohol loosens a desperate woman’s lips and she says more than she should. Bheseni is called to perform a ceremony but Lindiwe doesn’t reveal her true motives.

Scandal! airs on e.tv Mondays to Fridays at 19h30.

Continue Reading
You may also like...
Related Topics:scandal, soapie teasers

WATCH: Uyajola 9/9 11 July 2021 Full Episode Video on viral366
Tomorrow on House of Zwide,Sandile and Soka find themselves competing to be Ona’s shoulder to cry on
To Top